Home » Compatibility » Is an Aquarius Compatible with a Taurus? (Secrets REVEALED)

Astrologically, Taurus and Aquarius have lots of uncommon things making them hardly create the harmony.

If Taurus represents the gentleness and thoughtfulness, Aquarius is the embodiment of the liberality, spontaneity, and ambitiousness. Then, how could these two get along in a romantic relationship?

Is an Aquarius compatible with a Taurus?

Let’s find out the compatibility of these two zodiac signs!

How Compatible are Aquarius and Taurus? 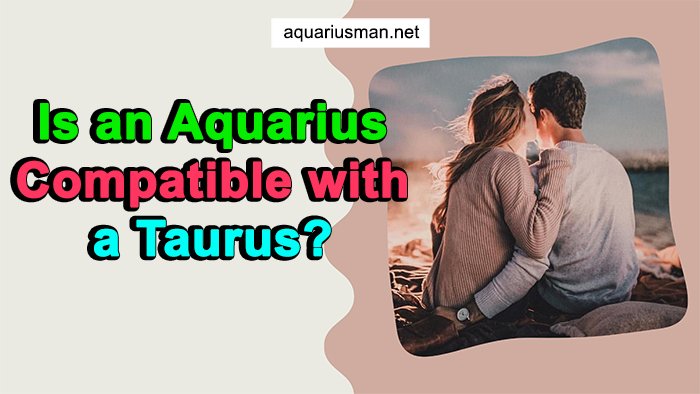 When it comes to the feelings between these two, it seems like they always have difficulties and concerns about expressing themselves. The goals and types of people they look for in a relationship are different.

Aquarius man is willing to change himself and to adapt to the new environment; meanwhile, Taurus woman is on the opposite side – she makes sure that everything around her has to be under control. She is not the changeable type and doesn’t want to step out her comfort zone.

Sometimes, due to the imagination, the Taurus female can’t help but feeling extremely hurt. Since she always wants to control the other person, she forgot that he is the free-spirited kind of guy. As a result, the Aquarius male will gradually sense the suffocating feeling and eventually end this relationship.

In general, the love of this pairing needs to deal with many difficulties because these two have many things in contrast.

Can they have potential to make it?

If both are not afraid to change and understand each other’s personality well, they will surely have a happy ending.

The love of Aquarius and Taurus is full of differences, as mentioned earlier.

If Aquarius woman is a mysterious, unpredictable person who values freedom and independence in any relationship, Taurus man in love is the guy who wants to control and set the pace.

Therefore, the bull male will sometimes have doubts about the relationship between him and his water bearing partner. Due to his lack of security, Taurus often feels insecure, unstable, and emotionally exhausted when falling in love with Aquarius. He’s unable to keep up with her beyond-the-reach thoughts.

What Do Aquarius and Taurus Think about Love?

As for Taurus, they always want to define the relationship once determining their feelings. They are not the huge fans of ambiguity. To the bull, everything has to be obvious because they stay true to their feelings all the time. Their biggest fear is when others not taking their love seriously.

On the other hand, Aquarius wants to be friends before entering a love romance. They want both to get to know each other well so that later they can open up easily about everything, such as vulnerability.

So, because of their opposite opinions, the relationships between Aquarius and Taurus often encounter disagreements and conflicts. If the two of them are wondering if they can get together romantically, they have to consider and think carefully.

Read more: What is Aquarius best match for marriage?

Do Aquarius and Taurus Communicate Well?

How can these two communicate when they are so different?

The communication between Aquarius and Taurus requires the patience and persistence from both sides. They need to lower their egos when listening to each other’s feelings.

Taurus is an introvert, so they love deep, emotional conversations; in the meantime, Aquarius is impatient and doesn’t feel the need of digging or gossiping about others’ businesses.

However, in this relationship, the biggest advantage is that Taurus is always calm and perseverant with all the changes from Aquarius. If their feelings for each other are strong enough, they can bring positive values ​​to the relationship as well as solve the other’s problems.

This helps both grow and become more mature.

Trust Compatibility of Aquarius and Taurus

If Taurus doesn’t feel insecure by Aquarius, they can be honest and trust the relationship more. Nevertheless, the water bearer neither really understands the attitude of the bull nor their fear.

Being criticized and receiving criticism are the hardest things for Taurus, and Aquarius’ honest opinions will build up the insecurity inside Taurus to the point of getting unconfident.

Their differences are something difficult to cope with.

Every little thing can become a big issue causing both to constantly think about ending the relationship. At the end, their relationship will be surrounded with just lies and mistrust that cannot be untangled in several days.

It seems like Aquarius has a hard time to find their flexibility, even though they tend to show their free nature to the world. To build trust with Taurus, they must be brave and stop thinking about the consequences of everything.

Emotional Compatibility of Aquarius and Taurus

As you may know, Aquarius and Taurus have completely different emotional expressions.

Taurus is a sensual sign, so they desires and really enjoys even the simplest "touches" with their partner, such as hugging, kissing, or holding hands. The physical contact between two bodies gives them the sparks. To Taurus, sometimes just tight hugs are the best encouragement, more than anything else.

As for Aquarius, they hate "PDA" in general. They are afraid of commitments due to the fear of losing their freedom and independence. Aquarius is always guarded – they don’t want to commit to anything, so it’s better to avoid all kinds of connection.

This is the reason giving rifts to their relationship.

However, if Taurus can sense the stability of Aquarius and Aquarius can feel the inner child inside Taurus, they can get along well together. Anyway, they still have to work extremely hard to make it last for a long time.

So, is an Aquarius compatible with a Taurus?

Even when they are love, Aquarius still values the freedom and independence. They don’t want to stay in a relationship where their partner always looks for ways to tie them down or control them. Meanwhile, Taurus always expects a love life in which they can feel loved and appreciated from the other person.

To be happy in a love romance, Taurus should restrain themselves in work as well as in love, and Aquarius needs to take a step back to embrace all the worries and concerns of the person they love.