Home » Horoscope » Characters of Aquarius Man: Why is He Misunderstood?

The image of a free-spirited wild child usually pops up in the head of most people when they talk about Aquarius man.

However, did you know he is the most understood compared to other men?

If you just read descriptions about this sign on papers, you may think being Aquarians sounds great and appealing, at least better than being a possessive Scorpio or a clingy Cancer.

The truth is: Aquarius feels hurt just being an Aquarius.

Sometimes the person he shows to the outer world is not his true self. Discover characters of Aquarius man in today’s article and you can gain a better glimpse and understanding about him. 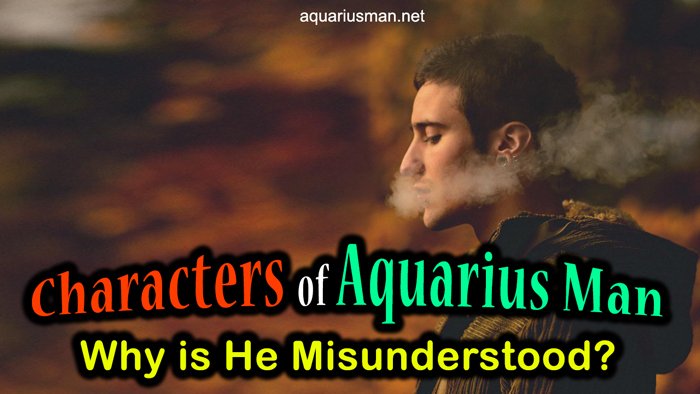 Aquarius man finds it bad when others misunderstand him as he doesn’t mean to be the way he is. Born under the Aquarius sign, he can’t help but being influenced by its characteristics and nature.

Having a creative mind and a rampant heart seems awesome; however, how many people know that all he receives in return are just being overlooked, considered as a weirdo, and even laughed at.

No wonder most Aquarius natives feel emotionally exhausted and discouraged when people around them do nothing but judging the way they live their own lives. In general, Aquarians are just misunderstood.

When it comes to Aquarius, everyone knows that they are emotionally disconnected. Even if being in a romantic relationship, they are also detached and distant, causing confusion to their partner most of the time.

The Aquarius male finds it hard to open up their feelings; well, you know…he can’t handle emotions. Though he is sociable and easygoing, gaining his trust is never an easy mission. Until he believes that you are the right person, then he will gradually let you enter his heart.

It’s not that he tries to act or behave difficultly. He’s just afraid of getting hurt if being too comfortable with everyone. Lacking security, he chooses to stay distant to protect his heart and soul.

Only the people understanding him can see his craziness!

The moment Aquarius man opens his heart and allows you in; tell yourself that he truly loves you. Once he is in love, it’s all or nothing. Never play mind games with this guy because he is not good at those. Also he takes love serious and doesn’t want to be messed around.

If he finds someone worth his trust and investment, then he is willing to give that person everything he has. In addition, he will come up with different surprises to make sure you are happy around him.

This sounds completely normal…what is bad about it?

As he loves hard, the hurtful feeling is double when he suffers heartbreak. Put it simply, Aquarius man getting hurt is catastrophic. Though he acts normal on the outside, he reverts back to the emotionally detached state deep inside. The walls around him this time will be thicker and higher.

Please understand that this is his defense mechanism.

Just like Gemini and Sagittarius, Aquarius finds it impossible to sit still.

This guy is always on the go. As a person of spontaneity and adventure, you can’t expect him to sit still and do nothing. He is the type that loves to run from here to there and always search for thrilling journeys.

It doesn’t mean that he has no time for relaxation, but chilling on the sofa every Friday night is a no.

Aquarius man has a great knowledge and understanding about this world that not many other signs have. He realizes the true beauty of the world; thus, spending days without discovering it is like he is wasting his precious time.

That explains why he wants to live to the fullest; otherwise, he may feel like he is throwing his life away. If you are in a relationship with Aquarius man, always prepare yourself for adventures.

4. He is not good at hiding his feelings

Or can I just say that he is terrible with that.

Astrologically, it’s hard to read an Aquarius because they are unpredictable. But in reality when this man feels something, it shows obviously. He indeed puts his heart on his sleeves because he has no idea how to cope with his emotions.

A typical Aquarius will put on a fake smile and pretend like nothing can hurt them. Nonetheless, we all know that it’s not. I must say that not all Aquarians, especially the male Water Bearer, choose to act like they are okay.

Some think that they want pity or attention; absolutely not, your Aquarius man just displays his emotions outside to feel better. He doesn’t even know that he is upset unless someone tells him.

That’s when he realizes what he feels deep down is already revealed unintentionally.

5. He gets hurt easily

As mentioned earlier, Aquarius man hurts terribly more than anyone else. Whether it’s about his recent breakup, failure in work or just something unhappy, he has a harder time to cope with and get over them.

Why? Influenced by the air sign, he has a deeper connection with the soul in various ways. The motto of an Aquarius is: “positive makes positives” – he is normally full of positive energy and prefers to get surrounded by positivity only.

Therefore, once he gets hit by negativity, he will instantly break down.

That’s all for characters of Aquarius man usually making others misunderstand.

He is unique and enlightening. He lives passionately and dreams big. From my experience, the Aquarius male is misunderstood because no one can understand or relate to him. Definitely the ‘one of a kind’ type, his goal is to spread his tenderness as well as creative ideas to everyone whom he’s met.

You can misunderstand him as much as you want because he doesn’t live to please anyone. But remember that Aquarius man makes the greatest company and most sincere lover.

3 thoughts on “Characters of Aquarius Man: Why is He Misunderstood?”