We all know that Aquarius man is super confident.

He trusts no one but his own intuition; that explains why he doesn’t really need to play mind games with others. But, what if he is acting like you two are not compatible and making you discouraged?

Is Aquarius man testing you?

Well, probably…he might be treating you with some of his love tests, from simple to even malicious. When an Aquarius plays games, his purpose is to see how much you trust him and if you get irritated with his behavior.

Keep reading to learn more about this guy!

Aquarius Man Will Test You in 4 Ways 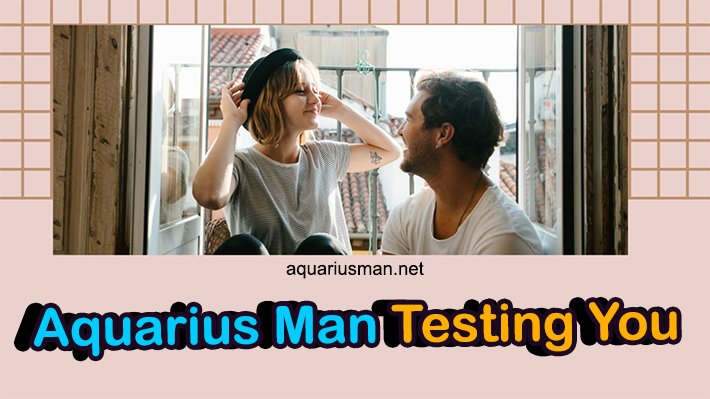 1. He tests your humor sense

Let me tell you that people born under this air sign have an air of positivity and a great sense of humor. That explains why Aquarius man is not the type of taking himself too serious. He believes that most arguments start from those too prideful or having a big ego. It’s hard to see this guy getting involved in any conflict as he takes criticism or jokes so well.

When he decides to test your humor sense, it means he wants to know exactly where your breaking point is when he tries laughing at yourself. He will make a few jokes at your expense and then wait for your reaction. Don’t get mad instantly because we all can expect that.

His purpose is to see if you really take it to heart or simply laugh it off. If you want to be with an Aquarius, you have to keep your positive energy around him. He dislikes being surrounded by toxic people or negativity.

The hardest thing of this test is that you hardly know if Aquarius man is really messing around with you. Direct and honest, he is the expert of playing straight; however, no need to worry about something cruel or harsh from him.

He isn’t likely to do that!

In general, to impress him, all you need to do is displaying your true sense of humor and taking his jests lightly.

Read more: Why are Capricorns attracted to Aquarius?

2. He tests your neediness

Well, if you are in a relationship with Aquarius man or have dated him before, you then surely know that he is a carefree, independent soul. He does whatever he wants and is never the type following the crowd. Rather than gathering with many friends, he more prefers to spend his time alone.

In addition, don’t expect this guy to explain himself to anyone, even if that person is his partner or family, as he hates that.

Once an Aquarius man dates you, he will test your neediness to see whether you’re willing to give them their private space, or you just a clingy girlfriend. Honestly, the last thing he wants is a clingy woman who needs to be with his 24/7 and keeps checking his location whenever he hangs out with friends.

He needs to know how you will react to determine his behavior later.

When he calls you or sends a message, don’t reply after one ring or as soon as you see the notification. Keep in mind that he can wait, and making him wait can make yourself irresistible to him. It’s not good to bombard him with plenty of calls or texts asking where he is.

Always tells yourself that Aquarius needs his alone time, and the best thing you can do is to not invade his personal border. He may pull away for a moment, but soon he will contact back the moment he feels ready.

3. He tests your trust

To Aquarius man, trust is a valuable element, especially in friendships and relationships. That’s why it’s the very first reason that he would never crush the trust of someone. As a friend and a lover, he is trustful and loyal to the core.

Due to that, this guy feels frustrated when people act like he is not reliable at all; much worse, some even claim that he is flirty and not serious in a love romance. He has a naughty side, but overall he’s still worth your trust.

In case you bring your insecure behavior on the surface, like checking up his phone or asking him many questions when you saw him meeting someone else, he can easily doubt that you have trust issues with him. If Aquarius man is worried about this, he will test your trust.

You will find him do everything deliberately because he knows it will somehow hit your buttons. Never try to flirt with anyone in front of him. Aquarius is an intellect and can easily figure out your plan. Don’t make him use this as an evidence of your insecurity; instead, just behave like you feel unbothered to what he is doing.

See also why Aquarius and Sagittarius get along well

4. He tests your controlling tendency

Not a single Aquarius loves to be controlled in any way.

A typical Aquarian feels disrespected when others tell them what to do. Even you suggesting him to have a bath before the date can irritate him. Don’t try to tell him this and suggest him that, or he will believe you are trying to dominated him.

About the controlling tendency test, you’ll find him leave a mental note whenever you ask him to do something. To pass this test, you need to just let him do his own thing, and avoid nagging or complaining.

If you wondering about Aquarius man testing you, the answer is maybe.

He is a fiercely confident and independent person who does everything freely and not really cares about others’ opinion. In a love relationship, he is loyal but quite emotionally detached. Aquarius never says no to excitement; thus, he loves playing games occasionally.

When it comes to choosing a partner, he wants to be with someone who he believes as good enough for him. If he doubts you about something, he will come up with a test in that aspect.

No need to be scared because his tests are innocent.

Do you want to stay with an Aquarius man forever?

The best thing you can do is to respect his true person and do nothing to change him. At the same time, he needs to know exactly who you are. Rather than changing yourself to fit his ideal type, you should act naturally and be yourself.