He is exceptional and different from anyone else you’ve met on this planet.

If you expect your partner to be adventurous and live a fullest life, then Aquarius man is a suitable option. As a true freedom lover, he is very independent and always on the go, looking for new things and getting ready for his next adventures.

No surprising at all if you find yourself having a crush on this guy – he is a charming, successful, and intellectual person.

Dating an Aquarius man is quite challenging as he is hard to read.

For those who want to win his heart and keep him hooked, then have a look at our valuable tips below.

How to Deal with Aquarius Man in Relationship? 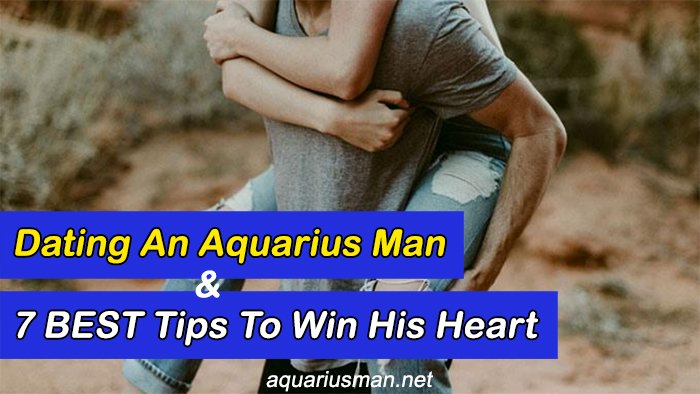 Barely following the crowd, the guy born under Aquarius sign tends to live in his own world; interestingly, that makes him mysterious and attractive.

Catching an Aquarius man’s attention is not easy; even if he falls for you, you still have to work much harder to keep his heart. Leave him in boredom and he will walk away from you quickly.

Learn about the friendship of Aquarius and Libra here!

The advice here can help you:

#1: Display your quirky side

Since Aquarius astrology sign is ruled by Uranus, the planet symbolizing rebellion, liberty, and originality, the male Aquarians are the opposite definition of convention. No matter what he does, he will surely find a way to make it unique as he is.

That’s why he feels impressed and has great respect for women who walk out the ordinary path. Don’t be afraid of showing him your quirky side as he believes it’s an attractive quality. He would love to learn more about your exclusive talents and interests.

You find him so on and off – is he suddenly ignoring or distant from you?

You shouldn’t worry or think too much! For those who’ve been dating an Aquarius man, this is a very common experience. Remember that he doesn’t like a needy or clingy girlfriend; therefore, he has tendency of testing you to see whether or not you willingly give him space.

The moment you feel that he’s starting to act strangely or withdraw, don’t chase him or bombard him with dozens of questions. Instead, let him enjoy his freedom while you’re advised to focus more on your own.

Sit tight, play cool, and he will come back for sure!

#3: Be independent & control your own life

Wonder which type of woman the Aquarius male gets attracted to?

Well, he usually feels drawn into gals who are independent, magnetic, and intelligent; especially, she must radiate a sense of being able to doing anything without looking for men (for example, Leo woman and Aquarius woman). Show him your interest in fun adventurous or profound activities, and he’ll be pleased to join you.

When being with an independent freedom lover, you need to be the same – never display any needy or clingy sign, or he will soon feel suffocated and want to run away.

Enjoy your life and prove to him you’re still good without his presence.

This man can’t get involved in a love romance instantly – there’s no chance for him to love at the first sight. He only develops special feelings for someone who has been his friend for a long time. Believe it or not, friendzone is a safe place he can comfortably make his move without the pressure of commitment.

Don’t try to figure out how he feels about you after several meetings. He only opens up if having much time around you and chances to getting to know your personality traits. Be fun, smart, and outgoing…and he will slowly fall for you. Play it cool or he will withdraw all of sudden!

After all, he expects the romantic relationship with you is as comfortable and peaceful as the friendship of you two.

#5: Show your adventurous side

Aquarius man is known for his huge love for adventure. Because of his yearn for excitement from life, it’s pretty difficult for him to commit and settle down. Family to him seems to be boring and suffocating.

If you approach him with the request of making declarations of love, for sure he will escape from you. In order to become a company in most of his journeys, don’t hesitate to display your preference for exploration and on how much you want to engage in thrilling experiences.

Can you be someone who is capable of broaden his horizons?

Of all things revolving around an Aquarius man, only his freedom matters him the most. Once he feels that you’re a free soul as him, he has no problem of making commitment with you.

#6: Avoid putting much pressure on him

Though he may be a free sprit, he has problems with responding to external pressures.

He already sets up his own schedules and expects things to flow exactly on what he’s planned. His behavior will change completely once his gut feelings say that his freedom is threatened. Try not to act clingy; otherwise, he will offer you cold shoulders and walk away from the door.

Rather than forcing him to call you his girlfriend, just display the image of an independent woman and make him fall for your charms. He finds you extremely irresistible when you are happy and busy with your own life and does not depend much on him.

To an Aquarius man, actions speak louder than words.

Your Aquarius interest may have his confidence with him most of the time, but he really hates the feeling of being made fun of. He seems independent and composed; however, deep inside he has his vulnerabilities just like anyone else.

This guy won’t go around asking for your approval or respect; therefore, you shouldn’t push him to the edge of his limit. Pay attention to everything you say to him because he craves to be accepted for who he is. Choose the right timing and let him know you appreciate his bright personality and positive energy.

Make sure you don’t mess up his ego with the teasing!

When dating an Aquarius man, it’s a must not to freak him out by showing your clingy or needy behavior; in addition, he will shut out immediately if you make too intense discussions about love.

Don’t try forcing him to commit to you; instead, this freedom lover prefers a casual relationship with sweet affections. Be patient with him, and the reward in return will be worth the wait.

Being with the Aquarius male means you are hanging out with a person full of wackiest ideas, so don’t be surprised. He would appreciate much if you can go along with his creative mind and adventurous nature.

Referring to love compatibility, this guy will find his happiness if being together with these following zodiac signs: Sagittarius, Scorpio, Taurus, and fellow Aquarius. Though at first he has trouble of making the commitment, he still makes a loyal partner once truly settling down.

On the other hand, the relationships with Libra woman, Capricorn woman, Gemini woman, and Aries woman may need a lot of hard work.

Are you dating an Aquarius man?

Tell us in the comment whether or not the tips above useful!