Did he feel hurt or regretted? How could he be okay after broke up with you?

So, you want to know how your ex Aquarius feels after the breakup. I’m pretty sure these questions have appeared in your mind lots of times.

Now you wonder how to hurt an Aquarius man and make him apologetic for losing you. Is this possible? From what I know, it takes a lot to hurt him, but it will hit him hard like tons of bricks once he gets hurt.

Regardless of your relationship with this guy in the past, there is a way to upset him.

It’s time to find out! 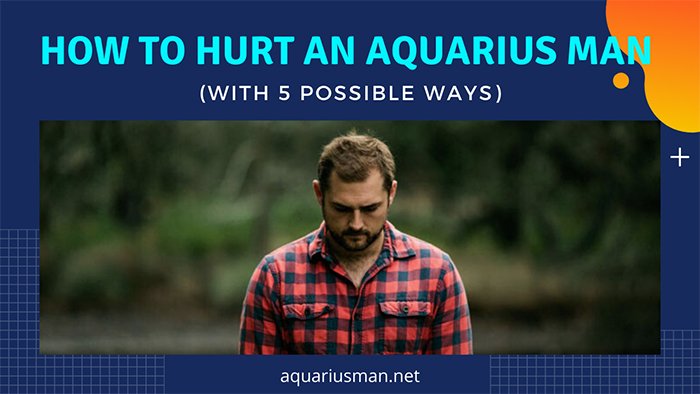 The Aquarius male can handle a breakup with ease due to his personality traits – as a freedom lover, he’s capable of letting things go without feeling depressed. Therefore, making him regret losing you is quite a challenge…but it’s still possible.

You don’t need to cast a spell on him.

In fact, I’ve come up with some simple steps that might surprise you.

Once everything between you and him is done, then just say bye to him. Be determined with your decision and do not go back and forth looking for him. You shouldn’t make him feel like you still have something for him or you can’t live without him.

In case you see him on the street or somewhere else, then politely greet him and just talk about school or work if necessary.

In order to make your ex Aquarius feel hurt, you need to be firm with your decisions, such as the boundary and distance you’ve decided to maintain between you two.

He will never regret losing you if you are too easy to get persuaded or lured. He’s supposed to be the person having a hard time after the breakup, not you…remember? During this period, let’s see whether Aquarius man displays any sign telling he’s serious about you. If not, then commit to all of your decision from the beginning.

#3: Be aware of false hopes

When you’re handling Aquarius man who’s trying to chase you back, it’s important not to fall into his false hopes.

If you are still in love with him after broke up, then the whole process will be hard for you. Keep in mind what I just told you, be firm and set the distance to avoid yourself from his sweet words. There are times he keeps giving you hope, especially if he wants to get you back.

Try to maintain the boundary and don’t be influenced easily.

#4: Show him your true self

If you and your Aquarius man broke up because he thought that you’re a dull, boring person, then show him that you are not like what in his thoughts. Participate in different fun activities, hang out with friends, and post lots of your pictures on social media.

Only change things that affect your life positively; in addition, keep reminding yourself that you do not do this for him, but for you only.

The best way to hurt an Aquarius man is to ignore him. If he requires you an explanation, then tell him directly that you never want to contact with him – this definitely hits him hard to the bond.

Much worse, you may consider being inconsiderate of his feelings and ridiculing his ideas. He is an intellect with a creative mind, so criticizing his opinions in the middle of a conversation will hurt him like hell.

Of course there are several ways to make this man regret he lost you, but in the end you may end up feeling extremely guilty also. Overall, he is just a sensitive soul that’s incapable of holding grudges.

As I said, you can hurt an Aquarius man by ignoring him. Nevertheless, he will immediately realize your plan and never fall for it. In case he has no idea what you are doing, he still feels broken but will rebound quickly.

Why don’t you clear your heart from hate?

If you were hurt terribly by him, then simply forgive him for all of his actions and words in the past and move on from this relationship. Making him vulnerable does not give you any happiness, so please show positive changes.