Home » Horoscope » Aquarius Heartbroken: Know 5 Things They Did in a Breakup

How well Aquarius copes with a bad breakup?

We all heard about how tough an Aquarius is and they don’t usually get hurt; however, they will surely experience the pain of a broken heart at certain points of their lives, at least once.

When it comes to Aquarius heartbroken, how they deal with it? Do you think they will cry out hard until feeling better or act as nothing happens then cry quietly in their room?

Though the pain of a breakup is hard to ease, let’s find out how an Aquarius handles a broken heart as well as heal their feelings based on their personality in today’s article.

How to Deal with Aquarius Heartbroken? 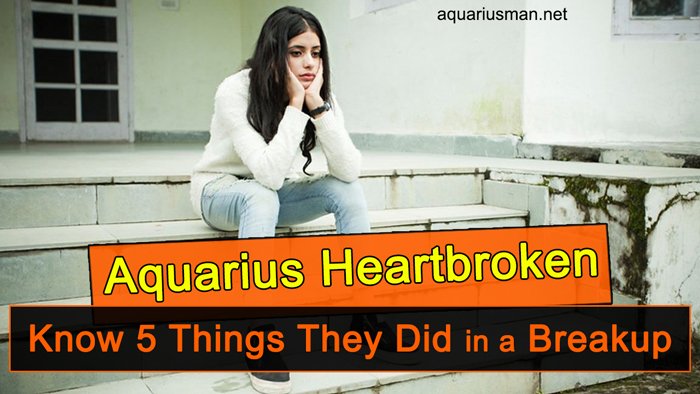 Not many know this, but Aquarius loves hard in a relationship.

They are afraid of commitment and not open their heart easily. But, once they let you in, they will be devoted and always come up with surprises to make their loved one happy.

Love is an all or nothing matter to Aquarius. Not the type preferring games in relationships, they expect you to be honest and faithful. If they meet the right person to spend their lives with, Aquarius natives won’t mind giving them everything they have.

Many say that these Aquarius people are emotionally detached, but actually they do get hurt. The moment they suffer heartbreak, it would be catastrophic. Nevertheless, they won’t cry out loud like what you think; instead, they again hide themselves in their own shell.

Yup, they revert back to being emotionally disconnected like before and build a thicker wall to avoid getting hurt any other time. Please understand that it’s just their defense mechanism – don’t mistake them as being difficult.

Keep in mind that Aquarius hardly gives a full emotional attachment to someone, even if that person is their family or close friend. Therefore, we usually think that they won’t hurt as bad as other signs when having heartbroken.

Aquarius does feel hurt after a bad breakup and becomes insecure. They will have a hard time to open up their heart again. Fortunately, they will realize their worth at the end of the day.

See also the dark side of an Aquarius here!

5 Things Aquarius Does During a Breakup

Known as the sign thinking 100% logically and 0% emotionally, here are top 5 things an Aquarius often does during a breakup:

They don’t want you to feel bad even if they are hurt badly.

Let’s be honest here, people born under Aquarius sign are indeed sensitive deep down, but of course they don’t want anyone to see this side. Therefore, it’s understandable that they act calm and composed when facing their lover who now wants to break up.

They rather cry alone in their own room than making a fuss in front of the person hurting them terrible.

In case Aquarius is the one breaking up with you, then they will end the relationship in a peaceful way so that they won’t look like a shitty ex to you.

As I said earlier, you will never know what an Aquarius thinks because they are hard to read and unpredictable. Also they seem detached and very unemotional even in love and during the breakup.

You think they may no longer have any feelings for you, right?

Actually they did love you hard and probably still do. The problem of Aquarians is that they are unable to express their feelings and emotions well. Additionally, they compartmentalize her heart and mind. They don’t want to drown themselves completely in love, or they will never get over a bad breakup.

They are rational and do not allow themselves to wear heart on sleeves; that explains why you don’t see them vulnerable when handling heartbroken. But believe me that only Aquarius feels how bad it hurt.

3. Refuses to be friends again

Don’t expect to get back to the ‘good friends’ term with Aquarius once you make them hurt terribly. These people are loyal and devoted in a relationship. The moment you betray or step on their trust, you are nothing to them.

Your Aquarius ex will say something like, “sorry, we can’t be friends” as soon as you suggest that. Friendship is one of the things they value the most in life, so they won’t allow themselves to become friends again with the one playing with their feelings.

Out of sight, out of mind…

Once you decide to break up with an Aquarius, they will accept it coolly and pretend the whole situation never happened. They will refuse to say a word about the relationship with you and put their heart on guarded until they are back to the normal state.

Though they feel hurt, they won’t waste time grieving because that is not Aquarius.

Maybe they will spend one day crying out all the stress and sadness, but then they will reach for support. Hanging out with friends is still the best activity to them – you will see them having fun with their close buddies every night and frequently update their social media.

To an Aquarius, everything is a matter of fact. Once you decide to end everything with them, then they also have nothing to deal with you. Unlike most people, they barely question about how the relationship didn’t work. Instead, they just let it be because it simply didn’t work and no need to waste time analyzing things.

Don’t misunderstand this as they don’t care. It’s just that Aquarius doesn’t reveal their true emotions for too long, or they will end up with disappointment only.

No one knows about Aquarius heartbroken if just looking at their exterior. They are social, fun, and calm; however, they may be dealing with much insecurity deep inside when it comes to a breakup.

Some say it’s an easy thing to Aquarius yet it’s not easy at all.

They invest so much in love so coping with heartbroken is not something that they can let go in a moment. Hope this article helps you understand the in-depth thoughts of Aquarius natives better.

For more information about Aquarius heartbroken, please leave your comment below.