How compatible is an Aquarius male with a Capricorn female? 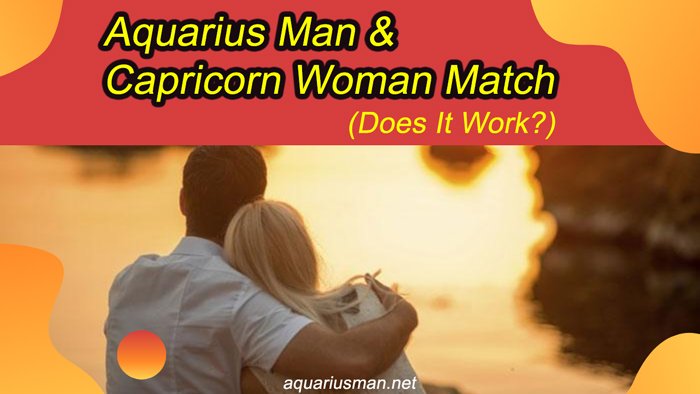 At the first glance, Aquarius and Capricorn seem to be a good combination as both are the emotionally detached type. They can easily understand and respect each other’s privacy.

Despite their good compatibility, they still have to try hard to make this relationship work.

It’s not that they are completely similar; in fact, they have couples of differences.

The man is truly a free-spirit who just follows the direction led by his unconventional mind and creative personality. On the other hand, the woman is very traditional and always dreams of getting married happily to a person truly loving her.

He is the son of freedom while her life cannot lack strict discipline and routine.

Do Capricorn and Aquarius match for real?

Continue reading to find out!

Both Aquarius and Capricorn are signs driven by self-improvement.

Yet, their purpose may be different – known as a humanitarian, he always tries to make the humankind itself better; meanwhile, she is all about gaining the measured steps to find her real goals and ambitions.

They have many things in common as also many differences.

Saturn is the planet of self-improvement and self-discipline; this somehow influences our two zodiac signs’ perspective about life aspects including love relationships.

Their viewpoint may clash at certain times: the water-bearer always reaches for something as a whole, whereas the sea-goat only focuses on achieving personal goals.

In addition to that, Capricorn seems to adapt changes very slowly; though they boast to be the smartest mind in the zodiac, their thoughts are just too pragmatic. On the other hand, Aquarius is a free radical fascinated by intellectualism and high ideals.

Capricorn finds it hard to keep up with Aquarius’s odd ideas and concepts.

With plenty of differences, it’s true that many conflicts will arise to this couple; however, it doesn’t mean there’s no opposite attraction.

Overall, this relationship needs both Aquarius and Capricorn involved to try their best so that the spark can remain for a long time.

About the Aquarius male

He is extremely independent and values freedom more than anything. Also known as a humanitarian, he spends much time of his life to help people. Despite his emotionally distant behavior, he does have an overwhelming compassionate aspect that makes many others surprise.

Aquarius is the man of mind; thus, it’s obvious that he enjoy intellectual conversations. In any relationship, he is a good companion always offering you a shoulder to cry on.

It’s hard to tell if this guy is really falling for you because he seems emotionally detached, but actually he easily gets shy and reserved.

About the Capricorn female

Similar to the male, Capricorn woman enjoys her private space a lot.

She is the natural born leader and doesn’t mind stealing the spot from individuals who are also capable of leadership. She handles all kinds of issues in life with her responsible behavior. In any aspect, this lady has practiced herself to be on an admirable level of self-control whenever doing something.

Although Capricorn is fiercely independent, she is also the family-oriented type when it comes to love relationships.

When these two people are involved in a romance, lots of interesting things will occur.

Firstly, the fun-loving man cannot stand of his woman’s endless routines and finds them more than boring. Sometimes he is really struggling of searching for any enjoyment when being together with her.

Well, it seems like they are too different, right?

Can Aquarius and Capricorn make a good match?

Asides from some dissimilarities, both the male and female of the two zodiac signs here do share a couple of things in common that somehow can soften conflicts between them. Most importantly, neither of them feels needy; in love, they tend to avoid falling to clingy, emotionally dramatic people.

They are honest individuals never attempt to portray themselves as someone who they are not. The woman may keep moaning about the partner who is not as responsive as her; however, she’ll never demand or force him to do what she wants.

Together, this independent-built relationship can definitely work.

With an outgoing and friendly personality, Aquarius man is certainly a people person.

He is rarely be in quiet contemplation; that’s why you often see him surrounded by many groups of fun, interesting, and enthusiastic people. Extroverted at heart, this guy has no problem in making friends as he enjoys interactions.

As talking with numerous people, he will recognize and support who are in need of assistance so that he can fulfill the drive of his life. Your Aquarius is quite gregarious; nonetheless, never expect him to show you his vulnerable, sensitive side.

Quickly get tips of how to attract an Aquarius man now!

Meanwhile, Capricorn woman is completely opposite as she is introverted.

Unlike the water-bearer, befriending with this female is a challenge as she won’t just accept anyone to be her friend. She has her outlooks and expectations about a potential companion; meet her standard or it’s likely impossible to get close to the sea-goat.

Beware of her straightforward nature. On the bright side, if you’ve successfully made it into the list of a Capricorn’s friends, then you can totally expect something to grow deeper between you two.

Once the man stays in a loving, long-term relationship, his emotional side then will be revealed. But, to a woman known for always being in the emotionally distant state, Capricorn may feel burden sometimes.

Why are Capricorns attracted to Aquarius?

There’s something special about him making her feel irresistible. In addition, compared to any other man, she always confident as well as independent being with a water-bearer; not yet, he often shows up at the same and gets her out of all troubles.

Aquarius man is the genius in understanding the need of Capricorn. Besides, she truly appreciates him for respecting her privacy and giving her space. As a friend, he is just too good and always appears once she needs him.

How about Aquarius man as a lover?

When it comes to love relationships, this man is relatively detached and not interested in committing to one specific woman. Because of that, the family-oriented lady Capricorn is quite afraid of getting involved with him romantically.

He makes friends very easily and quickly, no matter male or female. Unfortunately, this usually brings out the aspect that Capricorn woman has hid away: jealousy. If she wants to be with him, then she must accept that her future partner is very detached and likely to be friend with anyone.

Overview about Capricorn and Aquarius in bed

When this intimate relationship moves to the bedroom, the number of conflicts could increase significantly. The main issue is – both are extremely different in sexual appetite.

In the sexual matters, the male is pretty voracious while the female is opposite.

Unlike other women, this lady lacks of consistent passion, and that could create the dissatisfaction to Aquarius man as he is the type approaching to sex anywhere and anytime. You probably want to see tips of how to turn on an Aquarius man!

Combining the airy guy and earthy lady in a sexual relationship will create a pairing of imagination and reality.

He is unpredictable and always likes kinky experiments when it comes to his style of love making. He will try many unique positions and get excited if the partner actively shows him some incredible moves. Not serious at all, he seems to be very delighted to get self-dipped in plenty of crazy interesting things. This man can spend hours for making love while giving his entire soul.

She is a stable and traditional person when coming to sexual intimacy. It’s difficult to turn on a Capricorn normally; nevertheless, once she finds her passion, she will make sure to give her partner the impressive fulfillment.

Neither of Aquarius nor Capricorn is interesting in one night stand as they are very loyal.

The only problem is: they rarely have a night full of passion to enjoy lovemaking with each other as both have different thoughts. The only way for these two to adapt their own selves to each other’s viewpoints of love making is that both must love and sympathize with each other on an emotional and mental level.

Until they can reach the understanding at a certain point, then Aquarius man and Capricorn woman sexually will be willing to do what it takes.

The compatibility rate for this relationship is averagely about 80%.

If Aquarius man and Capricorn woman give each other’s differences respect and show understanding, they could achieve a successful relationship.

Once both finally make a commitment with each other, they surely will never go back on their word and will be loyal till the very end. One thing for certain, communication is not an issue for this couple as they are outspoken individuals.

When they feel something amiss, they won’t mind speaking their minds honestly.

The amount of tension between Aquarius and Capricorn depends on how well they communicate and deal with their difference. Of course both find their partner annoyed from time to time, but it’s important to look for solutions simultaneously.

Isn’t that what a relationship is about?

Together, these two can have an admirable relationship if working hard.