No matter how hard they try, some men really can’t hide their emotions when it comes to jealousy.

How about your Aquarius partner? Are Aquarius men jealous?

Unlike other men wearing their emotions on their face, this Aqua guy keeps his feelings deep inside his heart. Whether he is jealous, angry or sad, he chooses to hold it under his sleeves.

As a man of freedom, he doesn’t get jealous often and also doesn’t like that feeling because jealousy makes him go against his true person. An Aquarian male is social, outgoing, and full of spirit.

Jealousy will make him uncomfortable; therefore, he tends to pretend that nothing bothers him when it really happens.

Learn more in the following!

When an Aquarius Man is Jealous… 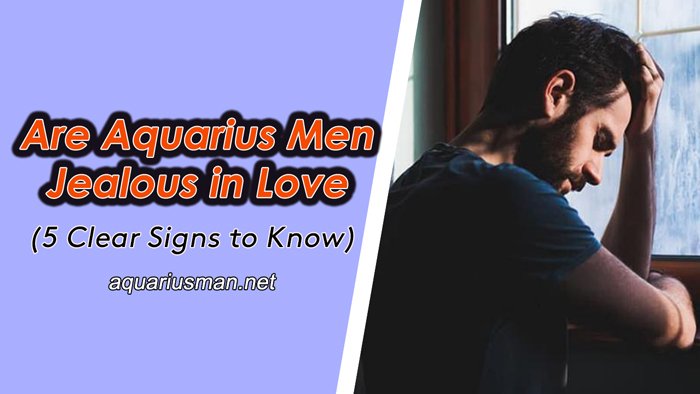 Don’t be surprised if your Aquarius man acts like he knows nothing when you bring up the jealousy matter in front of him. When dating with this guy, he will never admit to you that he’s jealous. In fact, he is good at pretending – he behaves like something doesn’t bother him, and at the end you will be convinced that he’s not jealous at all.

However, he indeed is.

Well, he may not express this thought loudly, but deep inside he’s frustrated with the fact he may lose you. The Aquarius guy is afraid of ruining his relationship once admitting he’s a little green with jealousy.

His thoughts are always on the train; that’s why he can’t help overthinking about all issues whether he wants to or not. If he’s really jealous, he will become quiet and get annoyed easily.

No need to worry much because his jealousy doesn’t last long.

At the same time, you shouldn’t overlook his jealousy also because it can bring negative intensity to your relationship.

Of all signs in the zodiac, Aquarius men are aloof and the least jealous. Nevertheless, he is still a bit sensitive but he hides it well underneath his aloof demeanor. Many claim that this guy is emotionally detached and not jealous at all in love.

The truth is that he does feel jealous sometimes.

Here are 5 unmistakable signs that help you spot his jealousy:

1. He is distant from you

Once any uncomfortable emotion grows within him, he has the tendency to distance himself from the situation. Your partner doesn’t want you to see his jealous, insecure side. He’s usually infamous for being emotionally detached in love; hence, being jealous is too much vulnerability for him to handle with.

He might need some alone time to process the whole situation. You shouldn’t be too worried when he disappears; as soon as he gets over his jealous feelings, he will make his comeback.

You will find him either intentionally ghost you or keep giving excuses to avoid seeing you during that period. In case you show up out of the blue, he will come up with different ways to not stay with you alone.

Find out why Aquarius is attracted to Taurus when both are jealous!

Don’t think of confronting him about his jealous behavior.

Both Aquarius men and women don’t like to get involved in emotional talks, especially when it comes to their own feelings of jealousy. So please don’t corner your man with many questions about whether he’s jealous or not; otherwise, he will get irritated.

He won’t talk things through if feeling jealous. It’s better to give him time and space to think about everything all by himself. Avoid bring the topic and ask for his explanation because the situation will get worse.

Even if he’s openly angry or upset, he still refuses to talk about his jealousy.

It’s not good if you try to push him to open up his personal matter. This guy is typically a social person who usually talks about everything until uncomfortable emotions show up and stop his willingness.

He will tell you everything when he’s ready!

Possessiveness is never a characteristic trait of Aquarius man.

Freedom is what he values the most and he is a very independent person. In a relationship, he respects his partner’s personal a lot space and expects the same in return. Nonetheless, this guy can get possessive on rare occasions.

If you find him behave possessive toward you, the chance is that he gets jealous and is afraid to lose the relationship with you. Never try to make your Aqua boyfriend jealous or envious because he is not happy with this kind of game.

Play around with his heart and he will lose all trust in you!

4. He feels weird or discordant

Normally, this guy in love is full of energy and pretty quirky; but all of sudden, his behavior and attitude change. He seems weird or discordant when talking to you. You may not notice this difference because usually the Aquarian male acts in odd and spontaneous ways.

Nonetheless, when you look closely into the situation, you will obviously realize that his quirkiness feels a bit off. If something is wrong with the way he behaves typically, then he might be bothered by a certain problem.

5. He flirts with others

Yes, another sign of an Aquarius man jealous is that he flirts with others exaggeratedly to annoy you. The fact that he is flirtatious by nature – it’s a trait of his persona; thus, he is very smooth with this.

He will use his flirtatious strength to mess up with you when being jealous. He wants you to understand his feelings as well as to see how you react in that situation.

This behavior is rare from your Aquarius, but it doesn’t mean it won’t happen.

Get tips on how to seduce an Aquarius man with a click!

So, are Aquarius men jealous?

The answer is yes – it’s just that he doesn’t want anyone to know.

Now you already know several ways to spot how this guy acts when his jealousy is brought up on the surface. Keep in mind that jealousy is never associated with the Aquarius male, as well as possessiveness and manipulation.

The chance for him to become jealous is rare. When dating with this free-spirited guy, it’s all about playfulness, freedom, and self-expression.

For more information about this topic, leave your comment below.