Have no ideas how to deal with that?

If so, you’ve come to the right place. The information here will help you figure out what is going on in his complex mind, especially if you just start a relationship with the Aqua guy and receive this kind of treatment for the first time.

No need to worry much because this man usually shows his silent treatment at certain time. Keep reading and find the answer for today’s matter!

What to Do with Aquarius Man Silent Treatment? 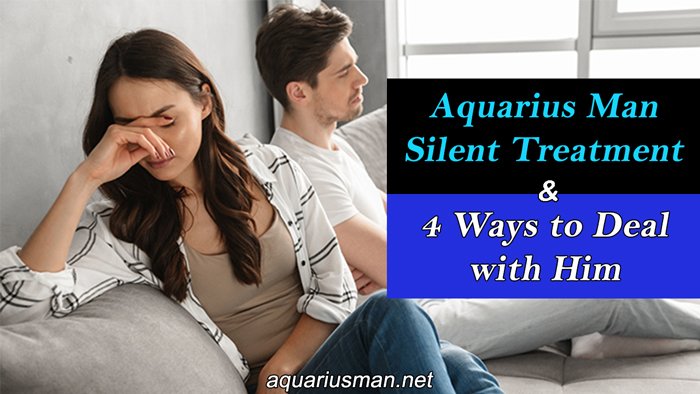 When dating a water bearer, this is what you need to expect as he can be silent with you at any time. Unpredictable, his silence means he wants to be alone at the moment or he is busy with his works.

In case you want to strengthen your relationship with this guy, it’s a must to know how to deal with his silent treatment.

Though he seems like an easygoing, sociable person, in fact Aquarius man doesn’t open up easily. He puts up walls around him, and it makes you hesitate to approach him. If you find him ignore you, don’t bombard him with dozens of ‘why’ questions. Simply leave him alone in his own space; that’s all he expects from you.

This guy is not good at dealing with emotions; hence, please don’t create more drama.

Once seeing him being silent, just let him sort things on his own. Even if he is going through a tough time, offering him a help may make him retreat back to his shell or (much worse) shut you out both emotionally and physically.

If he stays silent after an argument with you, please know that is one of his ways to express his annoyance. He needs some time to calm his mind and you need to leave him alone. Until he makes clear about what he wants to do next, he will return to your side.

2. Enjoy your own life

When Aquarius man expresses his feelings, it’s a rare scene.

He is not good at showing his feelings through words, and his silent treatment is probably a test to see the connection between you and him. This usually happens when you two are at the initial stage of a relationship.

Their silence can help him observe your body language, your vibes, and your thoughts towards him. In this case, you must try your best to keep him hooked. Since he loves mind games, why don’t you play along and simply enjoy the fun?

Remember not to act clingy or needy because Aquarius man hates that type of woman and both of you may end up with an argument instead of strengthen your bond. It’s better to learn how to keep him connected with you in subtle ways.

Challenge him intellectually as he loves smart girls; he will naturally open up his feelings as soon as you spark his interest. Also, consider having deep, personal conversations with him to break his silent treatment. Widen your knowledge and discuss different topics with him in your own unique way.

3. Observe his words and actions

Aquarius is an unusual, unpredictable, and unconventional guy.

The moment he goes silent towards you, don’t quickly ask him to explain the reason. Be wise and keep a keen eye on what he says as well as the way he acts. Let’s see what he will do when he is distant himself from you. If he spends more time texting on his phone or hanging out with his so-called ‘friend’, then chances he is cheating on you and wants to break up.

This man won’t have a problem after a breakup. If you don’t want to separate from him, you must show him you are still interested. In case you did something wrong, a heartfelt apology and sincerity can bring him back. Directly accept your mistake and prove to him you are willing to learn from that.

What if he still behaves normally with you but is just quiet?

In that situation, relax because he is maybe too busy with his work. He will come back to his normal state once his works are solved well. Sometimes the reason of his silent treatment has nothing to do with you.

When he is angry out of sudden and acts distant to you despite multiple times you’ve made your apology, simply give him the same silent treatment in return. He may give you a cold shoulder if you’re an emotional mess; therefore, let’s him taste his own medicine.

Believe it or not, this is one of the most effective ways to put an end to the cold war between you and your Aquarius man. In case he doesn’t text or call you back, then you shouldn’t reply him back. Stalk him on social media instead and focus more on yourself to make him curious about you.

Seeing you not caring for him makes your Aquarius guy feel curious and have an urge to break the silence. It’s not easy to act cold and distant towards the man your love, but it’s a possible way to stay with him peacefully forever.

You need to know when and where to draw the line – that’s how you respond to his silent treatment.

So, before concluding anything about Aquarius man silent treatment, please observe your partner first. Instead of getting yourself anxious, simply focus on his daily activities and how to treat people around.

If he hasn’t stopped his distant behavior after a long period, then make a serious conversation with him and speak your mind. Don’t be afraid because this guy respects an independent, determined woman.

For more info about the article here, leave your comment below.