You are dating an Aquarius man and want to learn further about him?

Well then you’ve come to the right place!

In this article, we’re going to discuss what Aquarius man likes and dislikes about a woman so that you will know about his ideal type as well as his expectation in a relationship.

The Aquarius male is very excited to spend time with – he is energetic, full of life, and truly the soul of any party. Wonder which lady could attract this social man in a love romance?

Here are some helpful hints for you to figure out!

How to Attract an Aquarius Man? 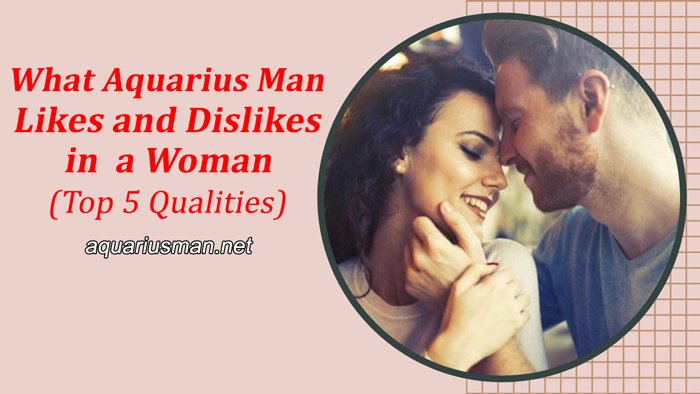 #1: Be an independent woman

You are talking about the guy who values his personal freedom more than anything. He is the type only obsessed with his own goals he is pursuing rather than following the crowd. Since he’s independent in almost everything, he wants his future partner to be as the same way.

He prefers a woman who can do things better on her own and knows exactly what she wants in life. More than focusing on his interests, you should ignore him and take a good care of yourself and show him that you will surely have a good time without being around him.

Aquarius man is the intellect and really enjoys intellectual conversations.

Not surprisingly if he can easily turn on when being around a gorgeous woman with a smart look. This man wants a full package – a lady who is beautiful inside out and capable of captivating his mind with her wit. Make sure you avail your sense of humor at the appropriate moments.

Engage in as many smart talks as possible whenever you’re around the Aquarius male. Widen your knowledge so that you can communicate with him about any topic.

Aquarius man wants to be with someone who’s always in the positive mood in order to keep him staying optimistic. No matter what kind of difficulty she may encounter, it’s better to be in a happy, upbeat atmosphere.

Don’t become arrogant or aggressive when you feel upset. Indeed, this guy likes the type of woman who can spread happiness and inspire others to live a joyful, fulfilling life.

He seems to have a great appreciation to the inspirational type of women. Most importantly, never display your selfish, jealous, or negative side when being next to the Aquarius guy.

Since he looks for an independent partner, it’s obvious that he never likes the idea of being with women who are clingy or needy. For him, the woman who is too dependent is really a big turnoff.

If you and Aquarius man are in a relationship, and then he senses you’re trying to cling to him or steal away his freedom, he will immediately walk away. Never does anything making him feel you’re invading his personal space; otherwise, he will get cold.

Also, it’s also not a good idea to bombard him with calls or messages all day long.

#5: Don’t be too aggressive

One thing for sure: Aquarius man will never fall for aggressive women.

Being aggressive means you will try to invade his privacy at any times, and that’s not good because (again) this freedom lover dislikes anyone who steals away his space and time. Don’t even start chasing the guy as he doesn’t like to be chased; also, it’s a sign of being possessive in a relationship.

If you keep acting aggressively toward him or forcing him to commit, the Aquarius male will run away from you in just a moment.

That’s all for what Aquarius man likes and dislikes in a woman!

Due to Aquarius male personality traits, he is the type difficult to pin down. However, once encountering to the right person, this guy will take you on the most exciting ride of your life. He is caring, kind, loving, and full of wit to have around.

If you want to be with an Aquarius for a very long time, then it’s significant to know what his idea type is. Aside from the stunning appearance, you must impress him with your intellect and independence.

Leave your comment if having any question about this topic!