Wondering why Aquarius man pulls away when in love?

When dating an Aquarius man, everything seems great because he is creative and has unique thoughts. However, sometimes he pulls away all of sudden. This guy is highly unpredictable; that explains why his distant behavior makes you confused or even frustrated.

He tends to withdraw himself from a budding relationship when falling in love with someone. If you’re looking for the answer why Aquarius man pulls away, this article is for you.

Learn more in the following… 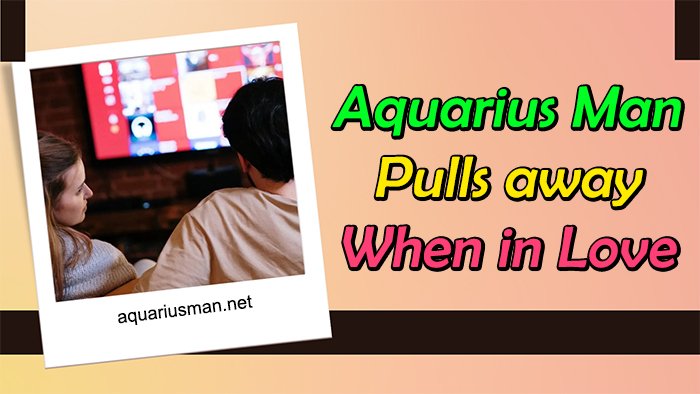 Guys born under this zodiac sign are ambitious, altruistic, and highly analytical. They dream big, so obviously they won’t immerse in a romantic relationship. They value freedom and independence – if you want to get him to commit, you must be pretty extraordinary.

See also: Is an Aquarius compatible with a Virgo?

Here are some reasons explaining why Aquarius man pulling away:

When seeing him withdrawing himself from you, perhaps he’s stressed out about something, and that of course has nothing to do with you. The Aquarius male will shut down when he seems to be upset over his personal matters.

You may think why he doesn’t ask for your help, right? Well, no matter how much the water bearer loves you, he never wants to rely on you even just a moment.

Extremely self-reliant, he can sort out his problems on his own. Due to his lack of security, he stays on guard all the time. Therefore, making him open up and share his problems is a real challenge. He will pull away and only come back to his normal self when everything is resolved.

2. He’s scared of letting you in

In the zodiac, Aquarius is one of the most brilliant, charming, and intelligent signs. Aquarius man uses his rational mind to do most of things. So, he has a difficult time expressing his emotions such as love, sorrow, and grief.

If this guy suddenly goes hot and cold with you, the high possibility is that he is overwhelmed with his own feelings. He is likely to shut down when falling for someone because he doesn’t want to get emotionally exposed.

Like I said, he’s generally driven by reason, and there’s no chance he allowing his feelings take control of his life. So, when seeing him retreating, it could be a sign that he’s falling in love with you.

Read more: The 10 second text that will make Aquarius smile for hours

3. He values his freedom more

I’m also an Aquarius, so I quite understand this.

Like Capricorns, Aquarius men are highly ambitious as well, but their ambition is a bit different. If Cappy strives for prosperity and reputation, Aquarius wants to change the world. They believe they can do it and they work hard to make it happen. To align with their goals, they even re-organize their lives.

Your Aquarius man can be selective on what they spend their time on.

As a creative soul, they constantly need innovative ideas which can only be found when staying alone. Once he feels like he’s losing his individuality or freedom, he’ll surely pull away from the relationship. The guy of this air sign craves for connection, but he’s likely not to get involved with someone who tries to tie him down or restrict his thinking.

4. He doesn’t want to fall deeply in love

As mentioned earlier, Aquarius man is afraid of letting someone in his life.

He believes that he may get hurt once he puts down his guard and opens up about his vulnerability. Similarly, this guy also has a tendency to withdraw himself when he thinks that he is getting too emotionally attached toward a certain person. In a love relationship, he will walk away if being overwhelmed with the intensity of his feelings.

In case the Aquarius male was hurt badly in the past, he will be extra cautious with his current relationship. He won’t let you enter his life easily. The moment you see him pulling away, it’s probably the indicator telling that he’s scared of being rejected.

5. He’s not ready for commitment

A serious commitment is a big obstacle to your relationship with an Aquarius man.

This is also a reason why he withdraws when in love. Free-spirited and highly independent, he is not the type willing to settle down. Getting him to commit to you seriously is such a tough mission. Having an adventure-seeking soul, he enjoys the life of a single person and hates being tied down. There are lots of things he yearns to experience to the fullest.

As personal fulfillment is one of his goals, Aquarius places a high value on his freedom. Therefore, he thinks that it’s not worth giving up his single life for a committed relationship. Unless the two of you share the same values and are on the same wavelength; otherwise, he won’t stick around.

What to do when he is pulling away?

1. Let him go for a while instead of chasing him.

2. Since he was born under a rational sign, it’s not good to become too emotional or make a fuss when he withdraws from you. Respect his emotions and be more sensible when approaching him.

3. Respect his need for his friends, not restricting him to meet them.

4. Take some time to yourself so that you can seriously consider how his pulling-away behavior is affecting the relationship of both. Don’t blame him, or this will draw him farther away!

5. Remind him that you want this relationship to work and you two are on the same team.

Check out what turns him off in this video:

Now you finally know why Aquarius man pulls away when in love!

No matter what his reasons are, he’s now detaching himself from you. Personally, I think it’s up to you to deciding which way you want to respond to his actions. Think precisely – whether or not you should reach out, confront them directly, and demand an answer.

If his answer hurts you, then accept it, move forward, and love yourself.