Home » Horoscope » Aquarius Weakness: The Disadvantages of Their Personality

Is there any Aquarius weakness?

Aquarius is the zodiac sign with the air element, so people born under it are generally friendly, ambitious, outgoing, and easy to make friends. There have been many surveys showing that most of geniuses are Aquarius due to their creativity and intelligence.

But, everything in life has two sides, and Aquarius is not the exception.

In today’s article, let’s have a glimpse into the dark side of their personality!

9 Biggest Weaknesses of an Aquarius 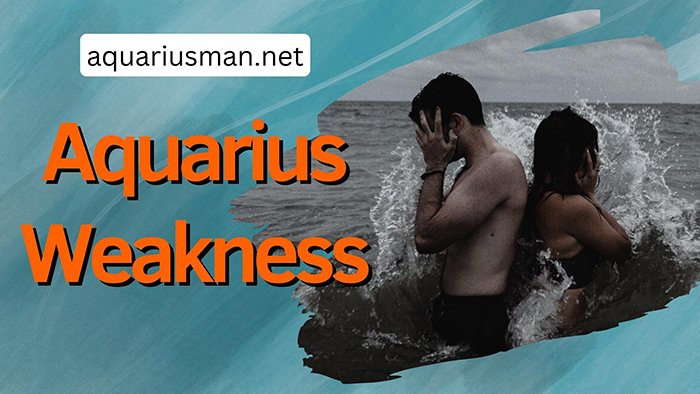 Aquarius has a lot of great qualities.

The thing is – once taking a closer look, we can also spot some biggest weaknesses of this sign. Learning these negative traits can help you understand their personality much better.

See also: How loyal is Aquarius?

As one of the air signs, Aquarius is all about ideas, intellect, and social connection. They can easily step back and see things from an objective point of view. Nevertheless, their rational and logical approach to life can sometimes make them appear emotionless or detached from others’ emotions.

Aquarius is stubborn about their opinions.

Aquarius loves freedom and dislikes being tied down. They only believe in themselves when making particular decisions. Not relying on others, so they sometimes make hasty decisions.

It’s true that Aquarians are quirky and free-thinking, but they’re also one of the fixed signs of the zodiac. This means they can be stubborn, inflexible, and self-righteous about their perspectives or points of views. These individuals are headstrong, so it’s hard to make them back down or admit they’re wrong.

Due to their stubborn personality, when participating in the working environment, Aquarius often causes unnecessary controversy.

Aquarius is never the type of people following orders.

They always act doubtful toward authority and avoid what is considered the ordinary in this society. When they’re stuck in a situation where they have to follow rules, they are sometimes struggled with that and often find themselves trying to rebel, even if it could bring harm to themselves.

Read more: The dark side of Aquarius that you’ve never known

Ruled by Uranus, also known as the "Awakener," since its aspects and transits bring sudden changes and shocks in astrology, Aquarius-born individuals are unpredictable and full of surprises. They always come up with unexpected things and also want the same thing in return.

When it comes to love relationships, Aquarius’ sudden changes can cause people to be worried, but their unpredictability can also make them fickle or indecisive in others’ eyes.

5. Be cold and distant

Aquarius leaves the first impression as a social and friendly sign in the first meeting. Despite of that, they still have an air of indifference and coldness.

These people give off cool and calm vibes in most situations, as this intellectual air sign always thinks about things logically and holds a distinct point of view. However, being emotionally unavailable always can sometimes make others think of Aquarius as a distant and unapproachable sign.

Sometimes it’s just because…they are lazy! In a collective environment, Aquarius usually doesn’t care about others’ business. They often put up a wall, not wanting to share their world with those outside. For Aquarius, their privacy is more important than anything else.

This is one of reasons why their social relationships are many but not deep.

Air signs are always swept up in their fantasy and ideas, so Aquarius can be said to be one of the zodiac signs most likely to overthink. This sign is easy to lose themselves to their failures in the future.

Instead of enjoying the moments of the present, you spend too much time thinking about future possibilities.

6. Ghost someone for no reason

Social connections are extremely important to Aquarius – they are, after all, a sign of friendship and a true social butterfly.

However, these free-spirited individuals also require a lot of independence. They’ve been known for disappearing from group chats or social media all of sudden. This air sign may be concerned about their need for freedom at certain times; that’s why they need to isolate themselves from the world for a while.

Aquarius is a little judge.

Since Aquarians don’t like convention or conformity, they can sometimes be a little judgmental or critical to those who are trying to keep up with the rules.

8. Underestimate the value of the past

The energy of the Aquarius zodiac sign is forward-looking. They have the tendency of replacing old traditions with new innovations. While it’s good to focus on the future and development, it’s also important to treasure the value of the past.

Underestimating the past could make them miss out a lot of lessons traditionally.

Another disadvantage of Aquarius is their poor balance ability, which can be said to be the worst in the air group. They do not know the balance between personal ego and social relationships, so they not only have difficulties in communicating and building relationships, but it also affects their mood and emotions.

If they get hurt, it takes a long time to recover.

They always want to go against what others do, isolate from the group with their different perspectives; as a result, Aquarius’ work is often underestimated. This negative trait also causes many unnecessary conflicts in romantic relationships as well.

That’s all for Aquarius weakness in personality!

For those in love with Aquarius, make sure to prepare your heart because of the complexity of this zodiac sign. They can love passionately at first, but when reaching the goal, they stop all of suddenly. It’s because…they’re bored, or there’s nothing interested to them.

Once Aquarius broke up with you, they might become cold and not give you any chance to get them back. Ironically, online love or one-sided love is the love making people born under this sign remember and love the most.